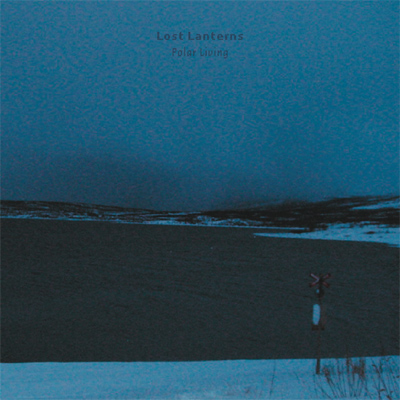 Lost Lanterns is the project of Ian Hawgood and Ben Jones. Both met at university and worked together in different bands, now teamed up to work alone on their music using live instrumentation, field recordings and computers.

The first result of their work is "Polar Living", a 60-minute long, very atmospheric release with six tracks. It's a gentle combination of deep melodic keyboard elements with field recordings (made entirely in the UK countryside during autumn/winter time). Warm keyboard drones are packing you in a safe cocoon, while the field recording-snippets have something mysterious and unknown.

It's "ambient" in it's best way. The pieces create their own room in your head while listening to them.

Reviewer: brian'sworld - favoritefavoritefavoritefavoritefavorite - December 2, 2008
Subject: not quite, but still refreshing
by most standards, its a super release - almost a new genre with thick field recordings, light beats and vocals! its essentially a collection of droney analog keyboard washed out with some carefully processed field work - almost pop actually...and, whilst a very very strong release...compared to Hawgood's recent work (esp. the last three: Soundtrack / Enfants Ruraux and Abstract Colors) it isn't really in the same bracket.

Reviewer: BerryAnn - favoritefavoritefavoritefavoritefavorite - April 16, 2008
Subject: Interesting and true ambient
Not up to Hawgood's solo release standards (insanely high) or possibly just different. This is more typical ambient music - drones, field recordings - nonetheless, very melodic in ways and the singing is a real surprise. Excellent but not quite as unique as 'Fire...' or 'Spiral' (both sheerly brilliant).

Reviewer: bimmy - favoritefavoritefavoritefavoritefavorite - December 31, 2007
Subject: yet another great work
IDH is on fire (haha - see first release) at the moment. on his myspace looks like people are starting to get hooked and releasing with 12rec and experimedia is very exciting. this collaboration with B Jones is totally impossible to define - there is haunted singing, lovely drone tones, strange beats shimmering, field recording crushed and waving in your head, the production is awesome and the layers of distortion are amazing. i think this, along with the first IDH release, only go to prove he may well be the lovechild of eno and shields (mybloodyvalentine) and this new collaboration with Jones is perhaps even more exciting and different. Resting Bell are really kicking ass at the moment...this, IDH, Moabi, offthesky - bloody great work.